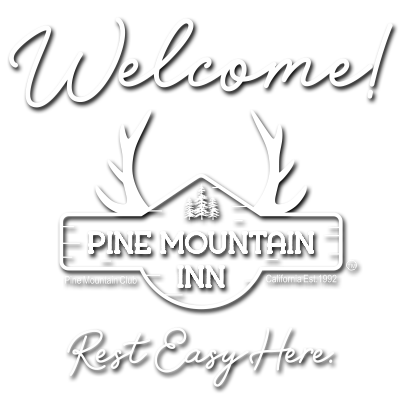 The Pine Mountain Inn is hidden away in a secluded valley of towering pines at the base of Mt. Pinos and Sawmill Mountain in a private woodland community known as Pine Mountain Club—a beautiful and friendly mountain village reminiscent of California in simpler times just an hour north of the Santa Clarita Valley.

A stay at the Pine Mountain Inn surrounded by the Los Padres National Forest offers you a place to relax and enjoy spectacular mountain vistas, miles of scenic trails in ancient pine forests, clubhouse amenities including golf, tennis and swimming, fresh mountain air, and a stunning canopy of stars at night.

We look forward to welcoming you to the Pine Mountain Inn!

The Club Room was named after our beautiful PGA rated 9-Hole Golf Course with separate tees and yardages for an enjoyable 18-Hole round. We know you’ll be comfortable in our Club Room with its fireplace, soaking tub, and semi-private deck.

The Jordan Room is warm and inviting with its Bellagio plaster walls, massive winery-style furniture and wonderful rock fireplace. Bring your favorite bottle of wine and enjoy it on a private deck. We think the Jordan Room will be on the top of your ‘must stay’ list.

Our Mountain Trail Room offers a warm and cozy mountain feel complete with a four-poster log bed and a wonderful rock fireplace. You’ll sleep well in this room after a long day of exploring our beautiful local mountains!

Our Pine Cone Room is the perfect place to nestle in on a cooler mountain evening. You’ll love the warm colors and soft blankets. The room was designed to accommodate our guests that use a wheelchair and is pet-friendly.

Decorated in Vintage Shabby Chic style, our Rose Room offers nothing but sweet comfort. Enjoy a great night’s sleep in an old fashion white iron bed. Cozy up with a good book on the loveseat or enjoy some fresh mountain air and coffee on the deck.

The night sky in Pine Mountain Club is known to be one of the darkest in Southern California — perfect for stargazing. The Star Room offers a private deck where on a clear night you’ll see the brightest moons and the galaxy like never before.

The mountains of the surrounding Los Padres National Forest are alive with a beautiful array of wildflowers each spring! Our Wildflower Room is a breath of fresh air with bright colors and wonderful antique furniture.

The entire Inn is available for family reunions, nature and hiking retreats, corporate and business incentives, group adventures, and best friend getaways! Plan your next escape to the Mountains with a group or your favorite people.

Amid evergreen pines and scenic mountain views, you’ll enjoy an Executive 9-hole PGA rated course with three par 4’s, the longest at 295 yards, and six medium-to-long par 3’s, one at 229 yards. Front and back nines have separate tees and yardages for an enjoyable 18-hole round. Cart rentals are available. The course is challenging with water hazards and offers a Driving Range and a fully appointed Pro Shop.

The Clubhouse offers a cozy Lounge with a Full Bar, a Café, Decks with views, Recreation Room, seasonal access Swimming Pool and Lighted Tennis Courts. The Lounge offers a great selection of beer, fine wines, specialty cocktails, and live music on weekends. The Condor Café is open most week days from 8am – 2pm and 4pm-7:30pm Thursday – Sunday for dinner. The recreation room offers Ping-pong, pool, air hockey, and video games.

Whether you are looking to relax after a hike in the forest or make relaxation the adventure of the day, you can take advantage of the newly completed seasonal outdoor Swimming Pool and Jacuzzi at the Clubhouse. Surrounded by loungers and areas of shade, it’s a great place to hang out, get some sun and make a splash. The pool opens in May and closes in October.

You’ll find miles of trails within Pine Mountain Club and endless trails in the surrounding Los Padres National Forest. From short and challenging trails like the Woodland Water Fall trail with its rocky outcroppings to the meandering San Emigdio Canyon Trail that follows the slope of the San Emigdio Mountain — one of the oldest inland highways in California. Visit the Maps section below for trail location information.

Beautiful Fern’s Lake is fed year round by a mountain stream and is home to bass, bluegill, trout and catfish—no need for a fishing license. Please catch and release. Take a walk around the lake or bring a folding chair and just relax and take in the scenery. Picnic tables are available and leashed pets are welcome. You can even bring your battery or wind-powered radio-control boats. The lake is open from 8 a.m. to dusk.

Located in the heart of Pine Mountain Club and a short walk from the Inn, Lampkin Park features picnic areas, barbecues, grassy knolls, and places to relax and enjoy the magnificent forest setting and spectacular views. The park offers a volleyball sand court, Tetherball, and a basketball court. For kids, the park offers a sandy playground and plenty of room to run, swing sets, monkey bars, and slide towers.

The Pine Mountain Club Equestrian Center offers overnight boarding and a full range of services for Guests of the Pine Mountain Inn. Spend the day riding on the San Emigdio Trail that follows the slope of the San Emigdio Mountain for miles or head west into the forest. The rides provide spectacular mountain views, seasonal springs, wildflowers, and creeks, all within a beautiful unspoiled landscape. Call to reserve boarding at: (661) 242-3788

The Pine Mountain Village Center offers a wide variety of businesses and services. You’ll find all the essentials are here including a grocery store, restaurants, various shops, a bakery, self-service laundry adjacent to the Inn, a gym, Pilates studio, a Christian church with Sunday services, a post office, and a gas station with fuel available 24/7. The village center is also the host for community events all year long.

Pine Mountain Pilates is an oasis where you can come and deepen your connection to your body through movement in order to experience greater freedom, strength and well-being. Currently offering Massage, Pilates, Body Revitalization, and Meditation.

All sessions are customized to your needs and can blend a variety of modalities to create an optimal combination of strength, fluidity and alignment. 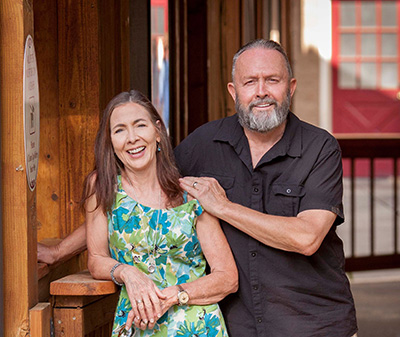 Tony is originally from the United Kingdom. He started in the hospitality and nightclub business very early on in his career with a passion for music and art. After running clubs in Ibiza, Spain, Tony eventually found his way to Los Angeles where he and Elizabeth began establishing restaurants and nightclubs.

Elizabeth started early in the restaurant and nightclub industry and also operated and partnered in the Hollywood Athletic Club as the General Operator and Corporate Officer of the venue.

Together, Tony and Elizabeth have worked in the hospitality business for over 35 years in the Los Angeles area and developed the Elizabeth Peterson Group (EPG) which is an urban land use planning consulting agency.

As their work in the club and restaurant businesses expanded and the planning agency grew, they would often take a break and escape to the mountains for rest and renewal. While there, they always talked about their dream of owning and operating an Inn of their own.

While searching for an Inn in California and with prompting coming from family members to make a move to the mountains, they discovered Pine Mountain Club, fell in love with area, and purchased a home in November 2020.

On Mother’s Day 2021, our daughter, Victoria, came up for a visit and while passing through the Village Center, noticed a small “For Sale” sign in the back window of the Pine Mountain Inn. Victoria called Elizabeth immediately.

Elizabeth and Tony fell in love with the Inn and purchased it. They began welcoming guests in August 2021.

Inspired to carry on the amazing legacy of the previous owner, Diana Chase, they plan to bring their own blend of hospitality and fun to the Pine Mountain Club Inn.

Tony and Elizabeth look forward to welcoming you to the Pine Mountain Inn! 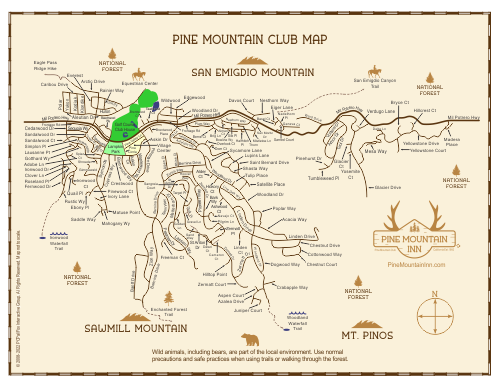 Here is a detail map showing the location of our streets, golf course, park, equestrian center, and village center, as well as a few of our main trails. 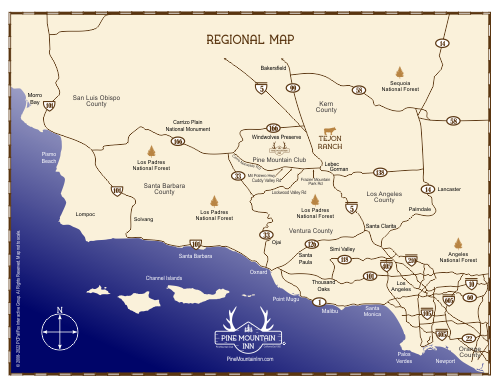 This is a regional map showing the various Southern and Central California freeways, cities, and counties in relation to Pine Mountain Club.

Pine Mountain Village is at the heart of Pine Mountain Club offering residents and visitors convenient shopping, dining, and services.

We're Ready to Serve You! 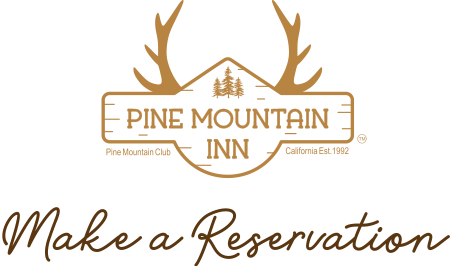